The club team from 1988 on a trip to California to play UCLA, Pepperdine, and San Diego State 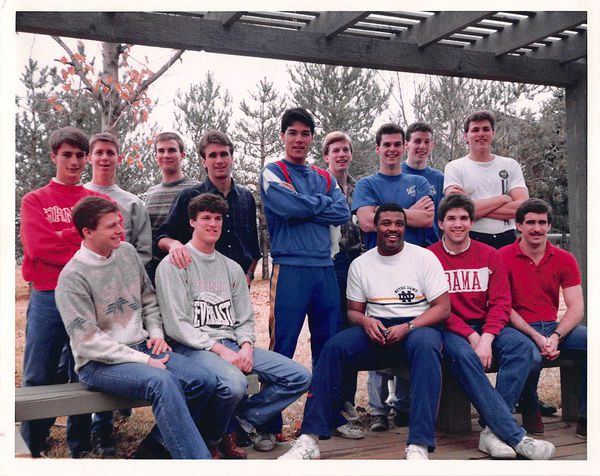 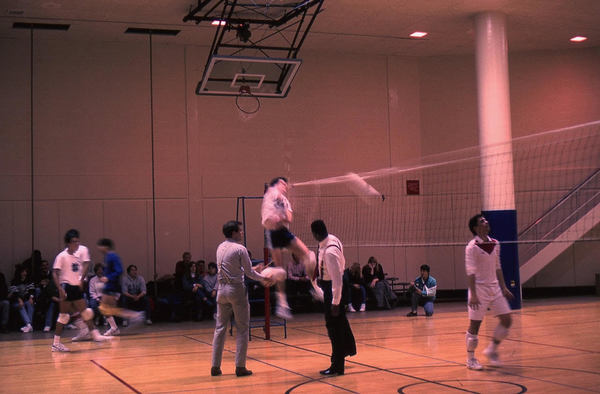 Most recent team updates appear here on the home page, while older news bits can be found on the "news" page

As Fr. Ted Hesburgh once said, “Hello everyone!”

To our many fans, far and wide: The Boys are Back. Again.

Led by new team President, “Old Man” Brian Messina, the Irish are looking forward to another successful year in which we win as many hearts as games. Aiding in this is returning Senior outside hitter/team dad/Vice President of Volleyball Operations and Bonding, Mike Stefan. After a long semester abroad in Italy, it looks like Stef is ready to show us his skills #Prego. No more fine wines, just swinging down lines. Forget the fancy art halls, from now on, he will only bounce balls. Also back from Italy is Senior opposite hitter, Nick Oddo. Oddo, an architect on and off the court, is ready to show us what that lefty arm swing can do (and a hint: it’s more than just pin-ups and sharp illustrations of timeless structures).

Unfortunately, the team will be without Junior outside John “Beef” Holland this semester, for he will be rejoicing in the fine wines and art halls of Rome as his predecessors, Stef and Oddo. We presume there will be “no, stop” to his shenanigans.

The squad this year will be better than ever. We have no weaknesses. With almost the whole team back for more, just wait to see what we have in store.

As for the new members of the NCAA Division 1 Men’s Varsity Club Volleyball Team, they provide nothing but necessary additions to the machine Messina has built. Sammy Mansfield (Sophomore) decided USC wasn’t enough and transferred over to join the good guys. He will bring his intellect, delicate finesse, and uncanny versatility to the court in order to help in big moments. Jack Redford (Freshman) eloquently displays his Canadian ferocity on the court, earning himself a spot as an opposite hitter on the Irish. Jack brings the thunder every time he steps on the court. His ability to swing sharp angle will not go unnoticed this season. Finally, the team is excited to see Tucker Watson (freshman) in the middle blocking position this season. Tugboat is a house at the net and Tool City on offense. Good luck stopping these new members this year, Midwest 10. It’s our time.

The Boys of Spring head to Indiana University this week to test the waters. Although we are not bringing the full arsenal, we are looking forward to competing with other clubs for the first time this season. As always, we will work tirelessly to achieve the best result possible. More to come, stay tuned...

Irish Rally to a Better Than Copper Finish in Nationals 2019

That 2016 team fought valiantly, all the way to a Copper bracket championship. But we have continually sought more. Well, alumni, you can rest easy. We did it.

The Fighting Irish came into the National tournament as an undervalued four seed, a slanderous betrayal in my personal opinion. It was no matter. The Irish were unfazed. They opened against a tough Indiana team, pushing them to a tight 26-24 loss in the first set and ultimately a loss in the match. The Irish rebounded and fought hard against Florida the fifth seed in the tournament. A gut-wrenching third set loss 15-13 was hard to swallow. However, the Irish finished strong beating a very talented UCSD team in two sets.

However, due to the tiebreakers, the Irish had to play UCSD again. It’s hard to beat a good team three times in a row, and it wasn’t meant to be for the Irish. The loss sent them to a consolation bracket for the next day.

The Irish came out determined in day 2. The Irish lost their first match to a warmed-up Utah State team in another tough 3-set match. However, they bounced back, beating a strong Michigan State team in 2 sets, guaranteeing a place in the vaunted Bronze bracket. It was a triumph for the team, securing a finish that truly was better than copper.

In the bronze bracket, the Irish ran into a tough Missouri team. The Irish fought hard again before suffering another brutal 15-13 3rd set defeat. It was a trying tournament at times for the team, but full of high-quality play from all members.

It is with a heavy heart that we say goodbye to Senior Middle Blocker and President Jack Waltrich. We will carry his legacy with us forever. However, we have Brian “Old Man” Messina taking over as president. I can guarantee he has full support of the team after earning zero votes against him during the election process. He may or may not have been running unopposed.

In all sincerity, it was a great season for the Irish. Returning most of the roster, the Irish are poised for a very strong 2020 season, and I already can’t wait for it.